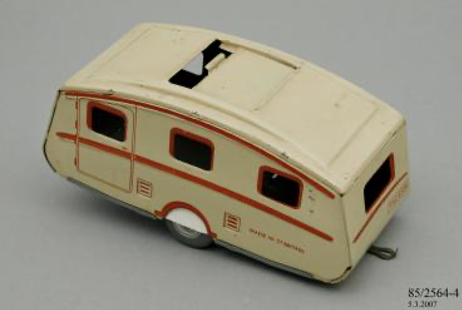 Mettoy Caravan – Great original model which you don’t tend to see everyday. – It has Made In GT Britain to the front and back. Please study the photos for the most accurate description. – Some age wear to places in the form of paint chips/scratches. It has some surface rust spots to the top. – It has great colours and the tow bar is in place. Both wheels are in place and this is a great early tin plate model. – Measures around 19 Cm long and just under 8.5 Cm wide.
This small car, which was made in Great Britain and bears a German flag on the bonnet, tows a ‘Cosicot’ caravan with a sliding roof.

Mettoy Playcraft Ltd is the name of a range of toy manufacturer in the United Kingdom. The Mettoy (Metal Toy) company was founded in 1933 by German émigré Philip Ullmann in Northampton, England, where he was later joined by South African-born German Arthur Katz who had previously worked for Ulmann at his toy company Tipp and Co of Nuremberg. The firm made a variety of lithographed metal wind-up toys. The firm is most famous for its line of die-cast toy motor vehicles of their Corgi Toys branch created in 1956. In the same year Mettoy merged with the Playcraft model railway and slot car company.

The company ended in 1984 with the assets of the company transferred to Corgi Toys.

1934: Mr. Philip Ullman and Mr. Arthur Katz both Jewish, came from the German toy making firm Tipp & Co. They moved to Britain where they laid the foundations of Mettoy in Northampton England.
1936: The Company now had premises in Stimson Avenue with a workforce of roughly 50 people.
1937: Larger premises were needed so they moved to Harleston Road.
1939: WWII brought a temporary closure of toy manufacturing. At this point they were entrusted to make many essential tin-plated products for the war effort.
1944: The Ministry of Supply selected Fforestfach Swansea factory, with 28,000 sq. ft. for further production.
1948: Mettoy started to build a 115,000 sq. ft. new modern factory at Fforestfach, for at least two reasons; the area had a ready source of raw materials and a need for high employment.
1949: The factory was officially opened by King George VI on 2nd April.
1952: The factory was enlarged and now totalled 200,000 sq. ft. of working space, where they now housed the production and commercial sections. After this came the installation of the high-capacity injection-moulding machinery.
1952: Swansea now became the official company headquarters.
1953: Playcraft Toys Ltd. was now fully owned by Mettoy Co. Ltd.
1955: Introduction of the die-cast precision made and scale model toy brand named “Corgi”.
1956: Playcraft Toys Ltd. launches the Corgi range with a Corgi Model Club newsletter later that year.
1957: Corgi catalogues started to be distributed in this year.
The late 1950’s to middle of 1960’s, there was a rise in the range of Products Mettoy offered: e.g. Wembley vinyl balls, Playcraft Railways (electric and clockwork), Vapour Trails model aircrafts and educational toys were made from polythene.
1961: In December there over 1,000 plus employees at its Queensway, Fforestfach factory and they became one of the largest toy manufactures in Britain, with a factory space of over 240,000 sq. feet.
1961: Head Staff were: Mr. Philip Ullman (chairman), Mr. Arthur Katz (managing director), Henry Ullman “Son of chairman” (director), Mr. Howard Fairbairn (director), Mr. Adam Heaton (works director) and Mr. Frank Varnals (sales director).
1963: Mettoy Co Ltd. was floated on the stock exchange which drew in over £40 million pounds.
1964: The Corgi Classics, marked 30 years of Mettoy and then the introduction of Husky, the latter was made for Woolworths.
1964: At the International Inventors exhibition in Brussels the Petite Typewriter won a gold medal.
1965: The Playcraft Wooden Toy range introduced the Berg range of plush animals.
1966: Mettoy won the 1st Queens Award to Industry, they also won again in “67 and “69.
1968: The Mettoy’s factories and warehouses were approximately 385,000 Sq. ft. and a workforce of 3,500 people.
1969: 10th March disaster struck with fire at the Queensway warehouse, many thought the company wouldn’t survive.
1971: The company founder Philip Ullman dies aged 88.
1973: An additional space of 48,000 sq. ft. is acquired at Skewen for assembly and storage.
1974: A new die-casting foundry was built in Fforestfach and later a new 50,000 sq. ft. warehouse was opened.
1981: In September Mettoy became a public limited company, but recorded record losses and closed warehouses in Northampton and Skewen.
1982: Mettoy launches the Dragon family computer, but the manufacturing company is sold and then collapses.
1983: A number of job cuts were made in this year and more redundancies in the following year. The official receivers were called in on 31st October.
1984: March of this year there was a management buy-out of The Corgi Toy Company, including the Swansea factory.