Previous Next
The cheap housing option 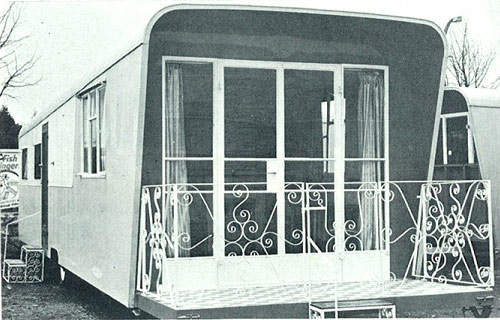 While holiday letting expanded, tax inspectors were catching up with the small investors, many of whom had not declared their earnings from hiring and had not kept proper records. Many were now content to keep these ‘paid off’ units exclusively for their own permanent holiday units. The 1960’s saw another phase with mobile homes increasing sharply in price, size and improved specifications, insulation, heating, HWS, bath and other home comforts, yet were still reasonably cheap. Widths had gone from 8’ to 9.5’ for relocation. Caravan widths were set at 8’ 1/2” and a maximum length of nearly 23’ provided it had a suitable towing vehicle.

Tow major developments of this period were the fitting of high output flued gas heaters to extend the ‘use period’ and inclusion of an interior WC for both letting vans and second homes. It wasn’t until 1959 the Minister allowed an experimental caravan on motorways and to be towed only at 40mph, mostly in response to the free-er regulations on the Continent. Increased speed led to increased stress on the caravan joints and by 1959 independent suspension was a solid sales focus.

By 1962 nearly 50% of all touring van manufacturers were using independent suspension. Wheel rim sizes had also declined from the old 16” to 13-14”. Tubeless tyres became the ‘norm’ and after 1957 a spare wheel was rarely included. Both disc brakes and electric brakes were available, but not popular. The improved long thrust over-run brake system became a standard but by 1967 electric brakes were the better option although slightly more expensive.
The Cavalier Caravan was released in 1955 with polyester/resin body, cemented together as upper and lower halves but with it came many design challenges in mould construction, catalyst/resin mix percentages, release agents, curing times, clean up issues, health risks for builders and colouring. This system was known as GSR – glass re-inforced plastic resin.

Through the 1930’s-40’s road lights were a rare occurrence and the Law covering this was little understood. During the 1950’s at least 18 makes of couplings were in use, most being a 2” car mounted ball. By 1960 the type of couplings on new caravans were reduced to 3-4.
By 1951 caravan manufacturers experienced restriction in both width and length limitations, mainly due to transport regulations, but these were inconsistent between Councils, so in this lay another problem trying to work outside the ‘in dimension’ measurements of 22’ long by 7 1/2” wide.

By 1959 numerous manufactures had trialed rollouts, slideouts, twins (adding to sideways or end to end), even 2 storey to increase living area, but still trying to keep ‘in dimension’ for transport. However barriers were being broken down and lengths had been pushed to 44’ and width to 10’ in an industry drive to provide better standards for caravan living.

Poor standards at most sites and resentment by local house owners because of supposed decrease in land values and further resentment because these people who lived in caravans were declared misfits to the norm of owning and living in a house and paying rates, etc.