Previous Next
How to stop 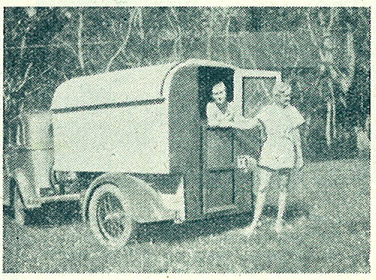 Another innovation included development of the over-run braking system which superseded the dubious cable and lever system operated by the driver. In 1927 Eccles managed to have court proceeding to the contrary dropped by proving conclusively that the over-run system was safe and satisfactory. Ten years further on, the system became standard on all caravans weighing more than 1 ton – unladen. By 1929 Eccles catalogue featured 13 models from 7’3” to 21’
In the early days, weights of caravans was not really considered, just length and 7’3’ was intended for 7-8hp cars, 11’ for 15hp and 15’ for 20hp, based mainly on occasional moving of the van, not on continual touring.

Caravan options included a food safe, storage cupboards to hold securely all dishes and pans, folding beds/seats, storage lockers and the extension or lean to tent – now more commonly known as the annexe.

The publishing of ‘testimony’ letters by owners who had traveled much of the British Isles but some had also ventured to overseas destinations with caravans in tow, led to further recognition of Eccles being a leader in the industry, apart from sales brochures. In Australia, about the end of 1928 Mr RJ Rankin of Sydney, designed a small “covered wagon” which could be towed by a small car. It proved such a success he set up a business to manufacture a number of them.