Effect of the war

Previous Next
Effect of the war 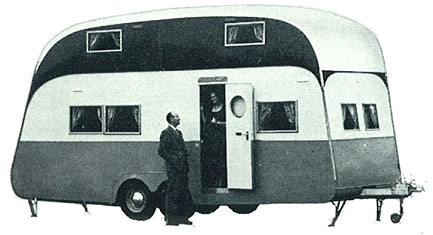 The beginning of WWII saw caravans become tactical headquarters, mobile hospitals, bakeries, libraries, offices, mobile lavatories, military living quarters. (Some 30 years later a company called Rollalong, re-invented the mobile hospital and found a ready market in countries susceptible to earthquakes and other natural disasters). Most mobile war units were not built by the caravan industry and as such much of that pool of useful know-how was wasted. Bureaucracy saw canvas come under the English Ministry of Transport Regulations which led to a Customs and Excise trap for purchasers of caravans post 1940.

Some manufacturers finished altogether, due mainly to the shortage of both skilled labour and materials as well as the down turn in all leisure activities. However Eccles continued and along with others were able to survive, providing units for the War effort – mobile canteens, motorised ambulances, munitions boxes, etc.

A few interesting laws for caravanners of 1939 – Must not exceed 22 feet in length, mud splashing wings, pneumatic tyres, white sidelights, same number plate as the towing car and if over 2 cwt efficient overrun brakes and a speed limit of 30mph for all two wheeled trailers. Also – no land may be camped on for more than 42 consecutive days without permit.