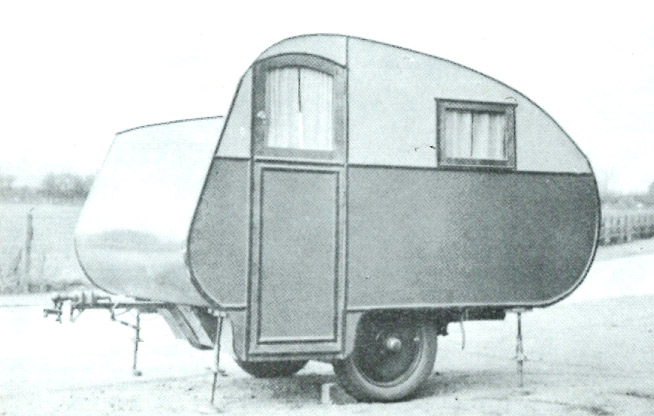 The ﬁrst streamlined towing caravan is attributed to Frederick Alcock in 1914 and by the 1920’s some manufacturers were exhibiting at the Motor Show. Typically they were doped canvas, laced up over ash timber with an oak frame (common up to 1931). Early caravans were constructed with a spar roof and canvas stretched over the timber but this created problems with condensation. This was over come by introducing a double paneled roof and air cavity between. Through the latter 1920’s numerous companies continued to expand as the lure of a cheap holiday in a caravan excited many to the opportunity to travel.

Famous English Manufacturer – Eccles are considered the founder of the British Caravan Industry. (later taken over by the Swift Group). Born out of a desire for getting away from it all, Bill Riley made his ﬁrst motorhome, based on a Chevrolet chassis, while his son (Bill Jnr) took more favourably to developing the trailer type, car drawn caravan. Both vehicles were displayed at the 1919 London Motor Show.

Trailer caravans were constructed on a separate chassis, with detachable wheels and pneumatic tyres, a timber frame with a body of rolled steel soldered at the seams and a cantilever shock absorbing coupling. Interior paneling was usually oak with insulation between in and the outside paneling. The units had typically green sides and stone coloured roof. Accommodation for two only, with beds converting to seats. Cooking was via a parafﬁn stove.

Following Eccle’s ﬁrst sale from the Motor Show they gambled on building a further 50 caravans and sub-contracted the shells. They also took on the challenge of promoting the image of caravans, caravanning and recreation. In a 1910 Rover, with caravan attached, Bill Jnr began their ‘road show’. Although no agents readily jumped at the market opportunity, Bill did ﬁnd out some weaknesses on route, enabling changes in construction. As business grew, so did their range from fold down units being exported, to caravans used speciﬁcally for promotions by Company Reps. The Eccles ornate decoration and high standard of construction by true craftsmen served the Company well in the custom built caravan market.

Another manufacturer (Raven Caravans) made their mark by initiating the screw down leg mechanism for leveling vans and subsequently the wind-down mechanism which is still in use today.